I am kind of enamored with North Carolina. While it's no vegan mecca, I usually don't have too much trouble finding something to munch on while dining out. Still, unless I'm at a restaurant that specializes in vegetarian food, it's slim pickings. I'm sure you've all become great friends with hummus and pita plates, garden burgers, and mysterious slices of stale carob cake. 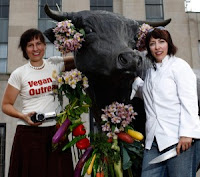 Chef Shirlé Hale-Koslowski and Eleni Vlachos decided that there needed to be more vegan options in Durham's locally-owned restaurant scene. Instead of writing letters, emails, or passive aggressive Yelp reviews demanding more than sad, defrosted patties, they decided to tap into chefs' competitive natures and create a challenge to find out which local chefs could pull together the best vegan appetizer, entrée, and dessert.

No hummus and pita plates allowed. No veggie or portobello burgers. No chocolate cake.

The response was amazing.

Now, admittedly, I didn't get to go out to try a lot of these places -- but I am really happy that it happened. I never got into cooking, really, until I went vegan. To me, cooking vegan is simple if you're willing to do your homework and try something new. I think that every good chef can make a good meal that's vegan. It was awesome seeing so many enthusiastic chefs get into the challenge, and seeing what they came up with.

You should check out the list of entries (with pictures!) HERE.

When Stephanie Anne visited me in October, Chiv and I took her to Nosh, because we were both the most excited about the fall slammer -- pumpkin pancakes, tempeh bacon with red onions, and your choice of fresh fruit or curried potatoes. It was amazing. 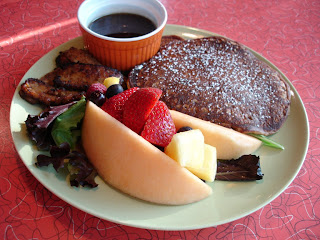 It was so nice to be able to go out to eat at a restaurant and have someone else make me pumpkin pancakes! 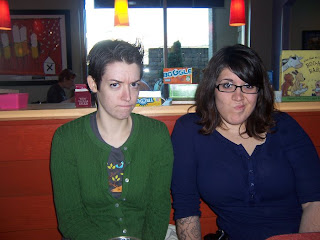 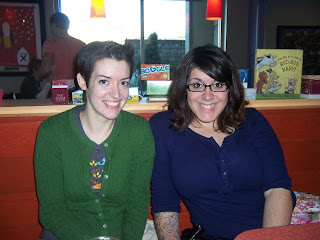 Shirlé and Eleni are revealing the winners Tuesday, November 9th at The Pinhook in Durham. If you are local, you should come out! From 5pm - 8pm they are having a "protein potluck," where they are asking everyone to bring their favorite (vegan, of course) protein. Go look at The Pinhook's website for more info!
Posted by Jenni Unicorn at 7:35 PM

I always tip at least 20%, secretly dislike people who don't like their moms, and I try to keep my books organized by color.